Please send us the following information.

About Dr. Arimoto
He has been working on distortion simulation for 30 years, and was involved in developing  a commercial code that is used worldwide.

About Arimotech's Logo
The logo was created based on curves of residual stress distributions in four different Cr steel cylinders after water quenching, which were measured by the Sach's method.

Arimotech is solving a challenge by software

Simulation of distortion and residual stress based on the Finite Element Method.

Thank you for your message. 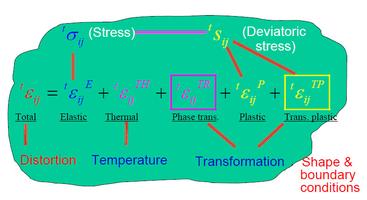 Arimotech is doing some consulting for helping and expanding use of simulation techniques on distortion and residual stress in parts, which are induced through a chain of manufacturing processes.

Unavoidable distortion in parts is produced after manufacturing processes. On the following linked page, quench distortions of a shaft with a keyway parallel to its length are shown as two movies, although these are not in commercial products.

The origin of this distortion was explained by Dr. Arimoto as shown in the following paper.

The origin of distortion can be explained by examining simulated results, especially for distributions of strains along a specific line in a body. Simulation shows us so many kinds of quantities, which are related each other. For example, strains such as total, elastic, thermal, plastic, transformation, transformation and plastic strains are controlled by the equilibrium equation as shown schematically in the following figure at the arbitrary time t.

It is clear distortion and stress at the final stage is resulted from so many phenomena relating to the changes of each strain during processes. An inherent shape of the body and its constraints are also affected to the distortion and residual stress.